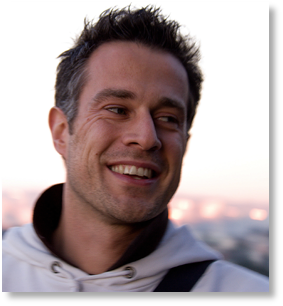 Thomas Grampp was born in Hamburg, Germany. Early on he developed a passion for making movies. He shot his first Stop Motion action movie at the age of eight. Countless horror and scifi shorts followed slowly incorporating his whole neighbourhood, family and friends.

After high school, Thomas worked as a location manager and first A.D. for many German TV shows and movies.

Shortly after he began studying at the renowned Filmakademie Baden-Württemberg in South Germany. He shot several short movies which were successfully screened at film festivals around the world and on German TV, including TWO LIVES, a psychological thriller and the horror fable LOST KNIGHTS.

After more than three years of intensive production he completed his highly ambitious diploma film VAKUUM.

The Romantic-Science-Fiction-Thriller is one of the biggest student projects of all time involving more than 300 people and several big studio sets. Twenty postproduction companies worked on the 500 complex visual effects shots.

After touring the festival circuit Thomas shot several commercials and worked as a programmer for Asian film festivals, e. g. the International Film Festival of India in Goa.

Currently Thomas is developing several high-concept feature film projects, including the horror-thriller SHALLOW WATER, AURA, a mystery-drama and the biographical adventure FREEDOM OF THE FORESTS. He is also attached to direct the thriller UNDER THE ICE.

Thomas’ vision is to invite a worldwide audience into fantastic new worlds that intoxicate, move and entertain while at the same time provoke thought.